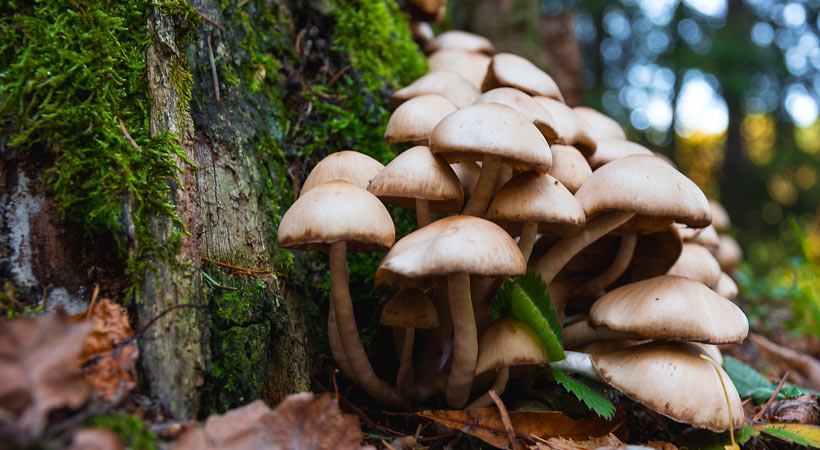 There are over 180 species of psilocybin mushrooms. These special types of mushrooms are commonly known as “magic mushrooms”. Each species has varying levels of potency and types of effects.

Magic mushrooms also have different levels of active ingredients. The most common of these ingredients are psilocybin, psilocin, and baeocystin.

You can find out more about what psilocybin is by checking out this article.

Each psychoactive component appears in all magic mushrooms in different percentages. When combined, these components give you the total potency for each mushroom.

Some types of magic mushrooms have up to 12 times the potency of others. It’s important to know what you’re taking ahead of time to ensure you’re being safe. You should be aware of the varying side effects and how to avoid having a bad trip.

In a separate article, we’ve consolidated 5 of the best ways to make sure you have the safest shroom trip. It’s our essential guide on how to have the safest and most enjoyable experience when taking magic mushrooms.

The following types of magic mushrooms are some of the most common, most popular, and strongest strains known.

Psilocybe Cubensis are often called “Golden Caps” due to their yellow-brown cap. This species is one of the most commonly used magic mushrooms.

Due to their popularity, this strain of mushroom has up to 60 different varieties like B+ and Penis Envy.

These magic mushrooms grow well in the wild. Different strains appear all over the world.

Like most magic mushroom varieties, Golden Caps are more potent when grown in a substrate at home.

B+ is one of the most popular strains of these magic mushrooms. Tripping on it generates strong feelings of spiritual connectedness and euphoria. You are likely to feel a strong grounded energy.

Psilocybe Semilanceata are the most widespread, naturally growing psilocybin mushrooms. They are also known as “Liberty Caps”.

These mushrooms are some of the few magic mushrooms that grow best in the wild. Most that are consumed are picked in the wild, rather than cultivated in a substrate.

Liberty Cap mushrooms look different from the many other strains of magic mushroom. They have a conical or bell-shaped cap that does not broaden with age.

In the wild, Liberty Caps can be misidentified as the poisonous Psathyrella species. It is advised not to search for these if you are not an experienced mycologist.

Tripping on Psilocybe Semilanceata is considered to be a very social experience.

Commonly reported side effects of these mushrooms are:

These magic mushrooms are unlikely to generate many intense, psychedelic hallucinations. Consequently, they are perfect for beginners.

The Psilocybe Tampanesis produces truffles or “scleoria” which contain psilocybin. These truffles are nicknamed “philosopher’s stones” because of their shape and dark brown color.

This mushroom truffle is easy for home cultivators to grow. They are commonly sold in specialty “smart shops” in The Netherlands.

You are likely to have a less intense experience taking Psilocybe Tampanensis. Nausea is a frequent side effect due to the density of the “stones”.

You may experience warm, cheerful feelings and a newfound appreciation for life.

Psilocybe Azurescens is the strongest psilocybin species that grows in the wild.

These mushrooms go by many different names. The most popular are:

This species of magic mushrooms contain 3 to 4 times more psilocybin actives than the cubensis and semilanceata strains. For this reason, Flying Saucers should be treated with respect!

Psilocybe Azurescens are known for their intense visuals and profound inner-self experiences.

Taking mushrooms this powerful can be overwhelming. There have been some reports of paralysis after taking higher doses. This does wear off, but can be anxiety-inducing if you are unprepared.

Due to their strength, Flying Saucers are popular for microdosing. This is because you need very little to experience their effects.

Psilocybe Caerulescens are also known as “Derrumbes” meaning “collapse” in Spanish. This species was historically used by Aztec Shamans; thus it has been cultivated for centuries.

This strain of magic mushrooms is also known as “Landslide Mushrooms”. This is because they are often found growing on ground devoid of plants – rivers and streams, or areas prone to landslides.

Derrumbes are still used by Mazatec people in Mexico. They are used when performing traditional ceremonies and rituals.

Psilocybe Caerulescen has a low to moderate potency. Trips with these magic mushrooms are usually short, lasting between 4 to 6 hours.

They are great for a beginner’s introductory psilocybin experience. You will likely feel elated and giggly after taking this strain.

Psilocybe Cyanescens magic mushrooms are nicknamed “Wavy Caps” due to the shape of their caps – wavy and rippled around the edge of the cap.

Wavy Cap magic mushrooms are one of the most widespread, wild psilocybin mushrooms.

This strain of mushroom is very popular due to its potency. It also grows in huge patches so is more readily available and accessible for use.

Psilocybe Cyanescens have strong hallucinogenic properties. You are likely to experience both visual and auditory hallucinations.

Wavy Cap mushrooms can cause increased personal and external-world awareness. These magic mushrooms also encourage a deeper appreciation for music and visual art.

These mushrooms are not part of the Psilocybe mushroom genus; rather, they are part of the Panaeolus genus. Their scientific name is Panaeolus Cyanescens. They are more commonly known as “Blue Meanies”.

These mushrooms are some of the strongest in the world. They have around 2 to 3 times the amount of psilocybin as the Cubensis variety.

A psychedelic Blue Meanies trip is likely to be incredibly uplifting. Intense feelings of euphoria, as well as vibrant visual and auditory hallucinations, have been reported.

Tripping on Blue Meanies can last between 4 to 8 hours so if you’re planning on taking these, strap in for the long haul!

Blue Bell magic mushrooms get their name for their blue-ish hue on the cap.

These mushrooms have a higher percentage of baeocystin. This causes the mushroom to turn a deep, dark blue when bruised.

Psilocybe Baeocystis has a higher potency when fresh. Their potency reduces to at least half when dried.

The most common side effect of Blue Bells is an increased sense of fun. You may also experience strange colors and shapes.

Psilocybe stuntzii is a rare psilocybe mushroom that only grows on the west coast of the US and Canada. They grow in large colonies in wooded and grassy areas.

The mushroom’s nickname is “Blue Legs”. This comes from the bluing reaction that occurs when they are handled.

Psilocybe stuntziis are hallucinogenic mushrooms and are known to cause both visual and auditory hallucinations.

There is so much more to discover about the world of magic mushrooms.

If you’re looking for more information about the usage of magic mushrooms for medicinal and mental health practice, check out our articles on how psilocybin reduces anxiety and how magic mushrooms help you stop panicking.

We also have more general information on shrooms, like how to identify magic mushrooms and [how to use a dosage chart].

If you have any more questions on magic mushrooms, take a look at our helpful FAQ.