The study and consumption of psychoactive mushrooms, namely Psilocybin Cubensis has seen a new revival in the twenty first century. The ever expanding research that has shed light on the myriad possibilities of this compound, in the field of medicine, neuroscience and psychoanalytics not only brought it further into the mainstream, but also helped to bring into the light its misunderstood past from the 20th century.

It is also crucial to look at a variety of cultures, from every part of the world that has had a relationship with the psychoactive mushroom in its different forms.  Prehistoric rock murals in Spain, depicting the usage of Psilocybe Hispanica almost 6000 years ago, the sacred teōnanācatl from the Incas of South America, cave paintings of Psilocybe Meirei in Saharan Algeria from almost 8000 years ago, and countless other examples point to a continuing relationship humankind has exercised with psychoactive mushrooms

Out of the one hundred thousand species of fungi that are known and have been identified and catalogued today, close to 200 species with a worldwide habitat have been found to contain Psilocybin 116 of them fall into the genus Psilocybe.

Psilocybe Cubensis is one of the most important and well known species of psychoactive mushrooms due to its wide range of distribution across the globe as well as its ease of cultivation. The mushrooms that contain psychoactive properties are referred to as tryptamine mushrooms, i.e those containing the tryptamine alkaloids Psilocybin or psilocin.

The species Psilocybe Cubensis was originally identified as stropharia cubensis  in Cuba in 1906 and then went through a variety of scientific denominations until finally, German mycologist Rolf Singer moved the species into the genus Psilocybe in 1949, giving it the binomial name Psilocybe cubensis.

To understand what exactly makes Psilocybe Cubensis psychoactive, we have to look at the active compounds it contains and how they interact with the psycho-physical makeup of the human body.

Psilocybin and psilocin are psychedelic tryptamines. The chemicals have a structure very similar to the structure of serotonin, a chemical messenger with important roles in our brains and digestive systems. Because of this similarity, psilocin can bind to receptors in the brain that are meant for serotonin. Binding and activation of serotonin receptor sites correlate with the manifestation of psychedelic effects.

Scientists in Prague, Czechoslovakia, recently identified the compound aeruginascin in Psilocybe cubensis magic mushrooms. This compund has been associated with the slight feelings of euphoria that come with the ingestion of Psilocybe cubensi, which when associated with the effects of Psilocybin converted to Psilocin, becomes imperative in the euphoric mood that comes along with the spiritual experience of ingesting mushrooms.

Within the genus Psilocybe, there exist a variety of species that differ in terms of tryptamine content. There are potent species which are colloquially known as Flying Saucers, Wavy Caps, and P. Subs, which are high in psilocybin and low in psilocin. They are also high in baeocystin and other tryptamines.

Additionally, there are “median” species, such as Psilocybe cubensis, Psilocybe semilanceata, and Psilocybe tampanensis. It is usually understood that in a group setting consumption, median species are better suited to engage in a communal ingestion experience, whereas for individual sessions, each mushroom will provide a different experience, even from batch to batch. This holds true even when taken to the composition of a mushroom, as the cap might contain more psychoactive tryptamines than the base. This is the reason that it is often recommended to chop and mix the entire  batch, in order to get an even scale while consuming.

After the brief but important introduction to Psilocybe Cubensis as a species in itself, it can be understood that it has a variety of strains with varying growth rates, harvest sizes, levels of potency, and effects. It is within these demarcations that most harvesters or psychonauts usually make preferences. Psilocybe Cubensis has a variety of strains such as Ecuador, Cambodian, F+, Creeper etc, all with their own subtle variations in intensity and type of psychoactive effects.

One of the most well known and globally preferred strain in psychoactive mycology is the Golden Teacher strain. It emerged as one of the most widely consumed strains of Psilocybe Cubensis in the 1980´s due to a variety of reasons that we shall list. Originally, the spores have been known to originate from the Florida Panhandle region. As of today the Golden Teacher has very much beocme a strain popularly grown within a controlled environment.

The ´Golden´ part of its name comes from the naturally occurring yellow-specked gold hue that the cap of the mushroom carries when it is fully matured and at its highest potency. It is known that even on drying out, it retains this colour. The cap is longer and more elongated than most other Psilocybin species.

Golden Teachers are a strain of Psilocybe Cubensis and should not be confused as an alternative species of mushroom. There exist within the Psilocybin Cubensis species different mushrooms, all with their own variations.

If you are looking to begin your journey with psychoactive mushrooms, Psilocybe Cubensis is one of the best initiators, especially the Golden Teacher strain which can provide not only a great first-time experience but also leave the consumer with a long-lasting supporting effect on their mental well-being.

They are also particularly well suited for microdosing and can provide a consistent scale in order for one to adjust their dosage. The standard practice of microdosing according to the well known James Fadiman technique goes like this.

Repeat the cycle on the 4th day. After repeating this cycle 3 times, it is recommended to take a 1-2 week break after which you can continue to repeat this cycle. This is the practice as recommended by James Fadiman who stated that, “We want people, on the third day, to experience how they feel without the substance, and reflect on the differences between ‘on and off’.”

This being said, all practice with psychoactive substances should be done with a clear mind and, when required, after consultation with a psychedelics expert or medical professional. This not only helps in clearing any doubts but offers a stable frame of reference in order to begin your wonderful journey with Psilocybe Cubensis. 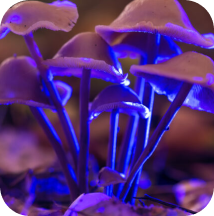 Check out our latest blog posts: