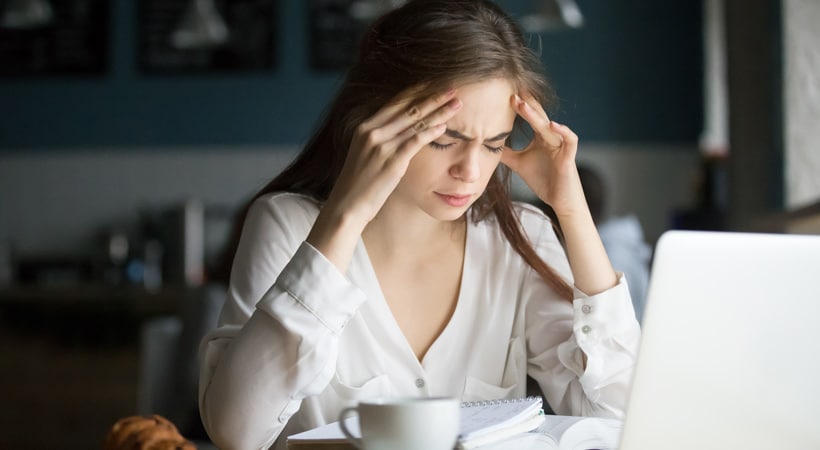 And I’m awake. Not because I’m reading a book or scrolling through social media.

Any sound, including a pin drop, exacerbates the pounding in my head. Any form of brightness sends me reeling into further pain.

So I sit still. I can’t move. I’m now holding my head between my palms. The pain is too excruciating. I want to cry in despair but I can’t.

I want nothing but total darkness.

…And some very strong painkillers.

It’s now 10 years since I began suffering from migraines. I get them about 15 times a month. Three of which are intense attacks. No matter what pain-relieving drugs I take, the pain still clings to me as if its life depends on my head’s throbbing.

These migraines come without warning. They spring up on me like an infuriating itch then leave for a day or two. Sometimes three days if I’m lucky. Only to be back with a bang — literally.

I have dined with this invisible ailment more times than I would’ve loved.

Anthony Peake, says this about his headache experience:

I felt like the top of my head was lifting off. It was moving upwards toward the ceiling. I then noticed that the office seemed to be getting smaller as if I was looking at it from the wrong end of a telescope.”

According to the Migraine Research Foundation, migraine is an extraordinarily prevalent neurological disease. This disease affects 39 million men, women, and children in the U.S. and 1 billion worldwide.

The two main drawbacks with migraine prescription drugs as a form of treatment are;

And this is where magic mushrooms come to the rescue — for you and me.

Magic mushrooms have made a comeback after many scientific research and studies. These mushroom species contain a compound called psilocybin.

Psilocybin is similar to triptans which are mostly used as migraine medications. Triptans are only effective at discontinuing migraines. Psilocybin, on the other hand,  is effective at stopping, reducing, and preventing migraines.

A. Khan – a freelance fashion writer from New York, says this about her experience with magic mushrooms;

I’m on mushrooms right now. Just a small amount, about half the size of my pinky nail. I’m not hallucinating or anything. but for the past couple of months, I’ve been taking a regular, tiny dose of psilocybin ‘shrooms every few days. And life has never been better. It’s called “micro-dosing”.

My main goal was to see if it could help rid me of my crippling migraines.

My head doesn’t hurt while I’m micro-dosing. I generally have a headache when I wake up, but it disappears after I take my morning microdose.”

Is Psilocybin Effective for Migraine Headache?

Psilocybin from “magic” mushrooms is converted to psilocin once ingested. It then becomes a partial booster for serotonin receptors called 5-HT receptors. Specifically the 5-HT(2a) and 5-HT(2b) receptors.

Psilocybin, together with other tryptamines, is called serotonergic psychedelics. This is because they trigger these serotonin receptors.

The receptors targeted by psilocybin induce a psychedelic experience.

How Is Psilocybin Used for Migraine Headache Treatment?

The first method is by taking a psychoactive dose, that’s equivalent to 3 grams of the mushroom.

The other method that’s recommended to deal with migraine is by taking micro-doses. This method is called microdosing.

Microdosing is the practice of taking small effective doses, normally under 0.5 grams. This means that you can achieve relief without activating any negative side effects.

We are at the threshold of an explosion in the understanding, diagnosis, and treatment of migraine. Plus with the help of MRF, more answers will soon be found.” — Joel Saper, MD, Research Advisory Board Chair

Read more on microdosing on our FAQ page.

There are two categories of migraine:

The term aura is used to describe a sensory disturbance. The kind that emerges shortly before or during the occurrence of a migraine headache.

The aura lasts for about 30 minutes to 1 hour. It invariably vanishes without lasting effects.

Most people who suffer ‘migraine with aura (MwA)’ are very likely to experience most if not all symptoms of ‘migraine without aura (MwoA)’. The American Headache Society says that MwA is mostly associated with extreme photophobia. Additional sensory symptoms occur over a 20-minute episode and less than an hour.

Some of the visual disturbance symptoms are;

The subtypes of migraine with aura are;

What Is the Rarest Type of Migraine?

The rarest type of migraine headache is the hemiplegic migraine. The term hemiplegic simply refers to numbness on one side of the body.

If you suffer from hemiplegic migraine, you’ll undergo a short-term fragility on one side of your body. A feeling of numbness will most likely follow. Vision troubles, confusion, and speech difficulties may be experienced as well. This might be a petrifying event as the manifestation is similar to that of a stroke.

Usually, the paralysis may last for less than 24 hours.

However, in the worst cases, it may go from one hour to several days. A headache may be absent or present.

It’s vital to be cognizant of the mechanism behind the hemiplegic migraine headache.

The nervous system and the brain rely on a fusion of chemical and electrical signals to function.

When an electrical nerve of ample strength flows from one nerve cell to another, it unlocks a ‘conduit’. This conduit behaves like a ‘gate’. The neurotransmitters released alert the nearest cells and communicate what response to give.

If a channel or conduit in the brain isn’t functioning well, neurotransmitters such as serotonin will be released abnormally. This is the case with hemiplegic migraine. The dysfunction of the channel contributes to the condition.

There are two types of hemiplegic migraine:

Let’s explore this in-depth below.

Familial hemiplegic migraine (FHM) refers to migraine attacks that occur in two or more individuals who belong to the same family. These individuals are faced with fragility on one side of their bodies as a result of the migraine.

More often than not, 50% of children with a parent who suffers from hemiplegic migraine will possess this headache disorder.

In FHM, three non-identical genes have been implicated. A chromosome 19 defect gene has been picked out in almost half of the lineage where FHM occurs. This brings about the dysfunction of the related calcium channel. This triggers a chain of biochemical alterations that end up in a migraine attack.

Other families have chromosome 1. This chromosome changes the conduct of a channel ― which necessitates cell energy. Still, in other families, chromosome 2 with a sodium conduit gene is altered. Hence causing the complicated migraine.

These three genes don’t account for all FHM cases. More genetic reasons are likely to be found in future research processes.

You’re considered to have SHM if you experience all the signs of FHM without any familial connection.

The genesis of SHM is unknown. Some causes of this type of migraine are said to be a result of sporadic gene mutations.

Based on research, people suffering from SHM usually undergo four typical aura symptoms during migraine attacks. They include;

Motor weaknesses experienced are usually one-sided and often in the arms.

A solid diagnosis must be made when you have the symptoms of either FHM or SHM. The diagnosis must include an exhaustive evaluation of your family history (genetic testing) and symptoms you experience during the migraine headache attacks.

Ensure that you get specialist advice so that you don’t commence on an imprecise treatment regimen. For instance, you should refrain from triptans during the aura episode of FHM or SHM. Triptans are frequently prescribed to treat other common types of headache disorders.

According to the American Headache Society, it’s important to have realistic treatment goals for complicated migraines. The treatment goals should focus on the severity reduction of headache disorders.

Microdosing With Mind Mend to Treat Your Migraine

With Mind Mend, you can be on your way to experience a significant reduction in severity, intensity, and frequency of migraine attacks.

Microdosing with Mind Mend products is a better treatment than prescription drugs.

Additional advantages include constructive changes in personal conduct, depressive, and anti-anxiety properties. This contributes towards turning the battle tide against neuro-inflammation which causes migraine headaches.

We have a microdosing guide that can assist you in this process if you’re a newbie.

We sure do hope to see you on the other side of a headache-free world.